A Day at the Auction, or the Red Band Demo that Got AwayPosted on: Saturday, February 18, 2012

I have an amazing wife.  Seriously.  What other woman would allow her husband to take the day off of work and drive two and a half hours to an auction to buy pens?  Unsupervised and on Valentines Day at that!  This last Tuesday saw an antiques auction that I just had to go to.  The images of the pens (among other antiques, everything from vases to quilts to postcards and everything in between) were a real teaser.  The first set of images were of a couple Parker 45’s, some Big Red ballpoints, and some Sheaffer cartridge pens.  The next page got a little more interesting.  A GF Parker 16 filigree.  Nice looking pen from the picture, although it could have been one of those crappy ebay pictures I talked about last week.  One just cannot tell until they get the pen in their hands.  Then there was the next grouping of pictures.  A bevy of 51’s, a 61, some BCHR pens, a Moore Safety, and two, yes, count them, TWO Parker 51 Demonstrators.

The first pen was your typical 51 Vacumatic demonstrator, but the second one looked a little different.  There was this red stuff, and a sac.  WAIT.  A SAC?  At that moment I knew I had to go.  One does not often get the chance to see a Red Band 51, much less the clear demonstrator version of it.  Even if I didn’t win, I needed to be there for this momentous occasion.  For those that are not in the know, there are probably less than a handful of these clear 51 red band demos out there.  The Parker Archives has one, and Mr. Shepherd (of the Parker 51 book fame) has the other.  That may very well be it.

I got everything ready, scoped out the rest of the pens in the images and made a list.  I got all my gear together and proceeded to get up at 5:30 am to be on the road by 6:00 am so I could get there in time for the preview.  Lisa was a real trooper, getting up with me, packing my cooler with a sandwich and soda and off in the dark and slush covered roads I went.

I arrived right on time, and set about to work the room.  I found the pens and got right to it.  The inspection.  Now as some of you know, non pen show auctions are not always the best place to buy pens.  Especially if there are a few local people that can afford to be there.  Lighting is always bad, and you are almost always rushed.  I saw the red band and gave it the inspection.  Black short blind cap, clear hood, and early plastic red threads.  This was a real winner.  It had some crazing in the end of the barrel, but who cares?  When are you going to see another one?  Ever?

I did a quick inspection of the rest of the pens and got a seat right next to the cabinets so I could keep my eye on them.  Fellow pen collectors started showing up.  We were all in the know, and all were interested.  Only one could win.

As luck would have it, within an hour they got to the first batch of pens.  The demos went first.  I held up my number and left it there.  The price climbed.  After what seemed like ten minutes, but was probably only about thirty seconds, the price was $1850.  My competitor, who showed no signs of letting up, clearly wanted this more than I.  When you factor in the 5% buyer premium and an extra 5% for credit card processing, it was already north of $2000.  I relented.  It was his.

All was not lost, however, as there were still good pens to be had.  May of the 51’s had gold filled caps, and there was a sterling cap in there as well.  Since I had made this investment in taking off the day and driving 140 plus miles one way, I needed to come home with something (and on Valentines Day no less).  Buyers were plenty and collector pricing prevailed over hoped dealer pricing.  After having won eight items, I deemed the auction was successful.  I left the last remaining treasure, a Plum 51, to my competition, who had already indicated he was to pay more for it than I was willing to go anyway.

We shook hands, said we’d see each other in Chicago in May and I got back on the road.  All in all though, I think I got some pretty nice pieces.  wouldn’t you agree? 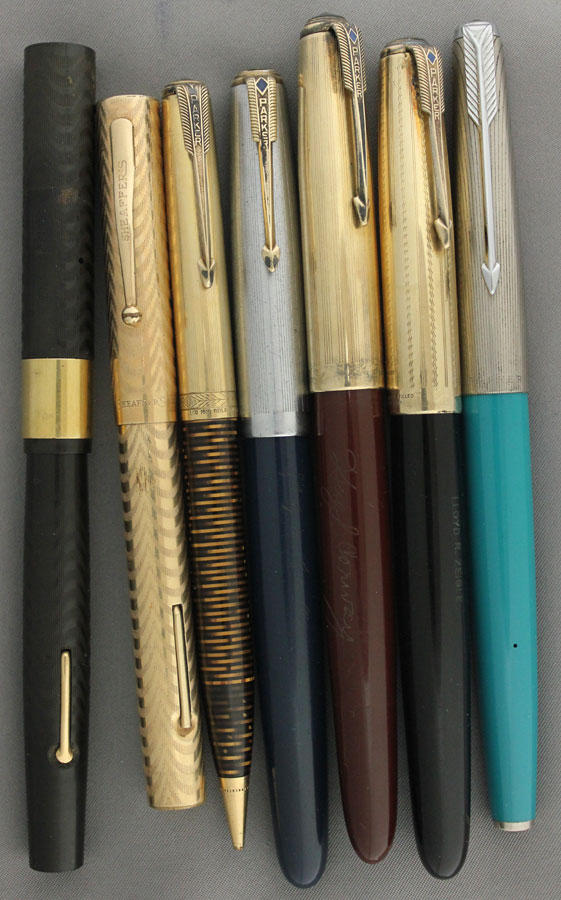