From the Workbench: Crystallization in Esterbrook PlasticPosted on: Thursday, February 9, 2012

I had a three ribbed jewel transitional Esterbrook come in this week for a new sac.  This was your regular resac, flush and clean type of repair.  That is until I took the cap off and saw this:

Now thankfully I had my trusty Bausch & Lomb Magna Visor on and was inspecting the pen before opening it.  Did you notice what I saw?  Let’s take a closer look at that section. 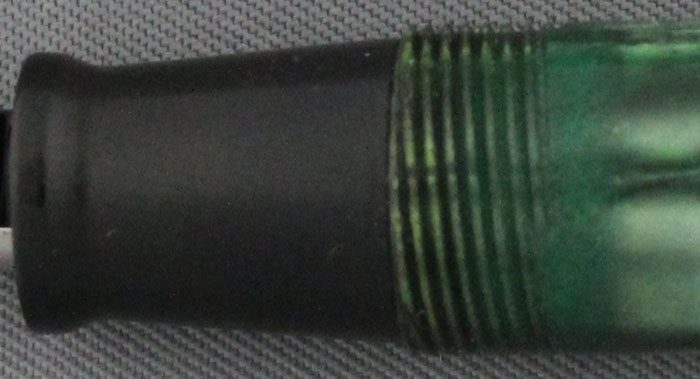 Well, look at that, the section has started to crystallize.  Now THAT’S something you don’t see everyday on an Esterbrook!  Best plan of attack here is heat.  Use a little to see if you can get it to come out, and pull straight out if at all possible.  Rocking that section back and forth or using a section pliers is most assuredly going to break the barrel.

In my case, heat did not work.  In fact a LOT of heat did not work.  Not only was this stuck in there, it was glued in with some form of adhesive that did not respond well to heat.  Thankfully, I was able to get it to move just a bit, then I put the pen into water covering the threads for a day and a half.  After this time I was able to get the section to move just a bit more, so more heat and more soaking and finally it came out.

Putting the section back in is another problem area.  Now you have it out, but putting it back in could also possibly break the barrel.  My solution was to gently scrape off some of the adhesive inside the barrel and sand down the section just enough to make it easy to go in without force.  My customers pen is now happily back together and in writing order.

Like I said, this is fairly uncommon in Esterbrook, but I see it most often in pens before 1948.  Single jewel transitionals and dollar pens, and I count on two hands the number I’ve really seen (not counting the $1.50 pens which were different to begin with).  Then there is THIS example:

A wartime twistfiller with extreme crystallization of the barrel.  In case you’re wondering, that black line is indeed where the cap screws down to.  I have seen other examples of crystallized twist fillers that were so transparent they were offered to me as demonstrators.  No such luck, I’m afraid.

The moral of the story is to inspect your pens carefully before repair.  What you don’t think is a big deal may end up being so!